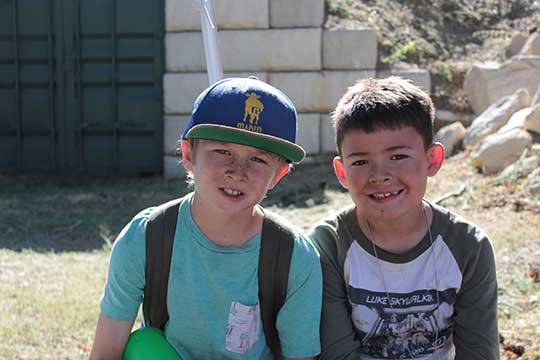 Don’t feel like taking a round trip out to California? Have to work? That’s okay. Kids arrive by plane to Pali Adventures all the time. We have staff that picks them up at the airport, and a bus that will take them up to our campus. It’s less than a two-hour drive from LA, so they’ll have time to meet new friends on the trip, but not enough time to get bored.

This traveling to camp alone experience can be the kickoff to your child’s little independence trip. Sometimes we hear kids are more nervous for the flying alone part than they are for the entire camp experience! To make that a little easier on them, we’ve compiled some tips so you can stay sane and they arrive where they’re going, safely.

Flying non-stop is more expensive. That’s a truth and we won’t deny it. But depending on the age of your child, you’re going to have to pay a “companion” fee with your child. This can be anywhere from $50 per flight to $150. When this happens, the airline basically assigns your child a flight attendant. They sit them in the back of the plane near where the flight attendants work and they help them board and deplane.

If you can manage to find or afford a non-stop flight, you only have to pay for the companion fee once. It’s also easier on your child, to get on a plane in one place and get off it when they arrive at their destination. That way, they don’t have to stress about finding their way through the airport. If you can’t book non-stop, that doesn’t mean your child won’t have a smooth flight experience. It just means that you’re going to have to do some prep work with them to make sure everything goes smoothly.

If they’re 12 and under (usually) their companion will help them get from gate to gate. If there’s a long layover, they have a room with some toys and coloring supplies where they’ll let your kids hang out (supervised) until it’s time to head to the gate. If they’re old enough to fly truly alone, go online and look at maps of the airport they’re flying into and out of. Most maps and airports have a dedicated wing or terminal where a certain airline flies out of.
So if you know your child is flying delta, then switching to another airline, you can find out what terminal Delta lands in. Then you can find their next flight, and help them find their path from the Delta terminal to the next airline they’re flying. These maps are usually pretty up-to-date, so you can even say “look for the Buffalo Wild Wings” or whatever kind of store or restaurant is in the direction they’re headed.

We know it’s a pain to get to the airport in the morning, but it’s worth it in the end. Delays at airports and with flights are a lot like delays at the doctor. If one flight or patient takes longer, then everyone runs 10 minutes late the rest of the day. So, the fewer flights that have left the ground, the fewer that can get messed up, which lowers the chance of your child’s flight getting canceled or being late.

Imagine the chaos that would ensue if your child was on a layover that got canceled, later during the day. What if it happened at night? Now your child is stranded in the airport with nowhere to go. Try to avoid that as much as possible, and book your flights early. Some sites, like Google Flights, will tell you if the flight you’ve chosen is usually on time, if it’s late, or if it gets canceled often. That’s good information to have if your child is traveling alone to camp and you can’t swing a nonstop flight.

3. Give Them an Info Card

Your child will most likely get through the airport without issue. They’re smart and independent, which is why you feel comfortable with them traveling to camp alone. But even smart and independent kids can get confused if things change too quickly, or if they take a wrong turn in a giant airport. Or forget what stop to get off on when they’re riding the plane-train.

The card should be a giant index card (they make jumbo size) with all the relevant information to their trip on it. For example – you’ll need your child’s name, their age, and their final destination. Make a list of their flight numbers and what time each one departs. Then, make a little list for “contacts”. You’ll put you and your partner, of course, and the name of whoever dropped them off at the airport. You’ll also want to list who’s picking them up, and their contact information.

You can last-minute laminate this card with some clear packing tape, which will make card stronger and it’ll stand up to the journey better. Punch a hole in it and tie the card to your child’s backpack, or whatever type of carryon they’re bringing on the plane.
Now they have a resource that they can give to someone if they need help. Just make sure they know how to pick someone to ask. Finding someone in an official uniform or who works at the airport is always a good bet.

Make sure their phone is charged and important numbers are pre-programmed. If they need extra minutes, roaming or a SIM card, arrange that before they leave. Put a travel charger in the carry-on with them, in case they run out all the battery watching videos!

Tips for Traveling to Camp Alone

Most kids have flown with their parents often enough that they’re familiar with the process. They know you have to go through security, find your gate, then get on the plane. As long as you prep them for what’s going to be different when they’re alone, give them the resources they need and make sure they know who they’re looking for once they land in California, they will be just fine. If you follow those steps, the journey to camp should just be part of the fun!

Is your child interested in traveling to a camp in another state or country? If so, have them check out Pali Adventures. You can get in touch with us online or give us a call at 909-867-5743. You can also choose to chat with a Pali employee directly by clicking on the chat box in the lower right-hand corner of your screen.