Learning How To Do Hollywood Stunts At Stunt Summer Camp 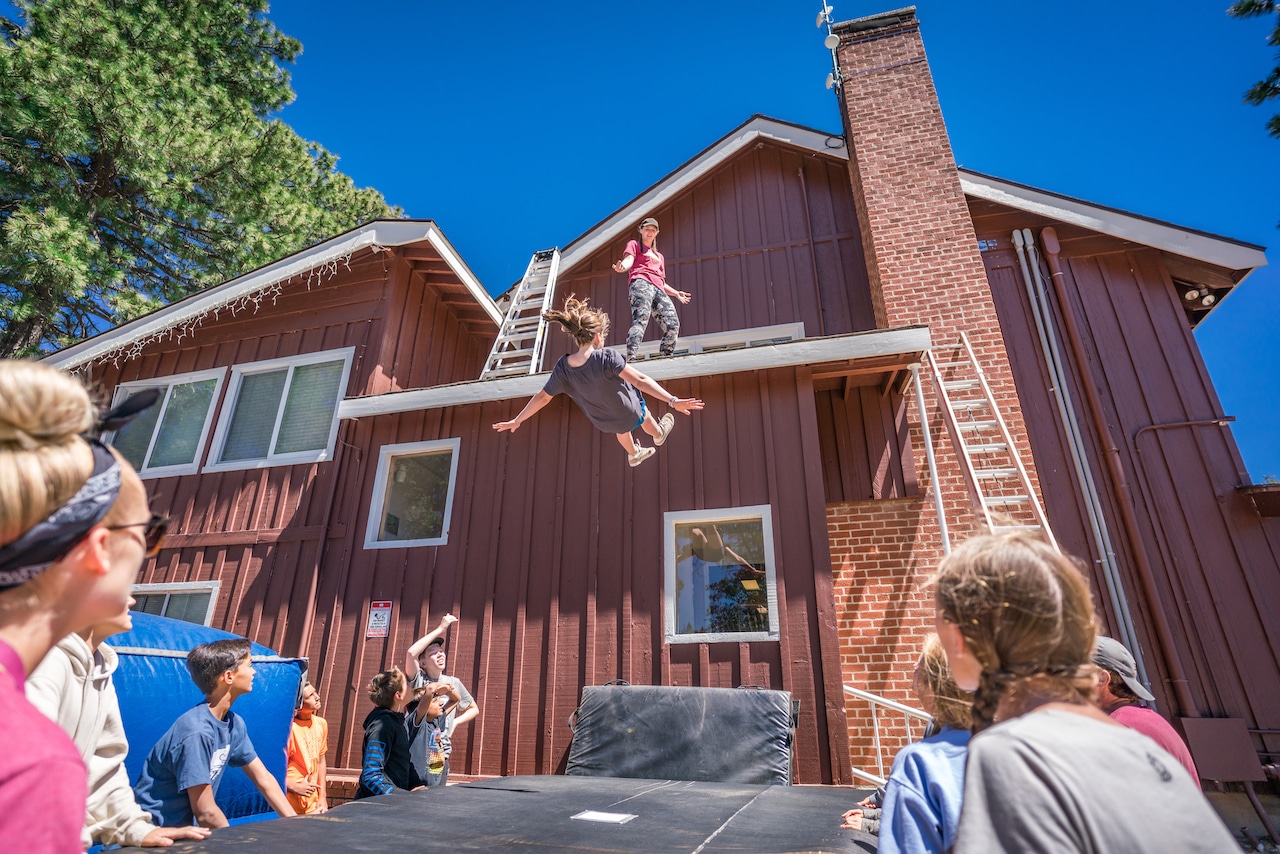 When most people watch a movie, they’re focused on the star. But what about the people who make action movies so exciting? Hint: it’s not the A-lister (at least, not all the time).

Sometimes that actor jumping from a burning building is actually the A-lister, but most of the time, it’s the unsung daredevil heroes of Hollywood: stunt performers.

Have you got a child who wants to learn what it’s like to be a world-class action hero? From fight scenes to dramatic falls, our stunt summer camp will teach your budding daredevil everything they need to know to have fun and be safe staging their own Mission: Impossible.

What is Stunt Summer Camp?

Every stunt performer has to start somewhere. The good news? Supporting your child’s love of action movies doesn’t need to include overpriced movie tickets or daring leaps designed to instill sheer panic in parents everywhere.

At Pali Adventures Stunt Summer Camp, we understand the allure of Hollywood. We also know that a lot of work goes on behind the scenes of those thrilling leaps and fight scenes–not just making them look cool, but making sure that those who perform them can do so safely. At stunt summer camp, we’ll give your young thrill-seeker the skills they need to practice safe stunts. Under the supervision of world-class professional instructors, they’ll learn how to execute a few exciting performance stunts.

They’ll have fun, but they’ll also learn the planning that goes into each stunt. More importantly, they’ll learn that without safety planning, a stunt doesn’t happen, and will learn to approach each stunt from a safety before the thrill perspective. Every stunt, even the most daring, is backed up by safety measures, technique, and extensive planning. 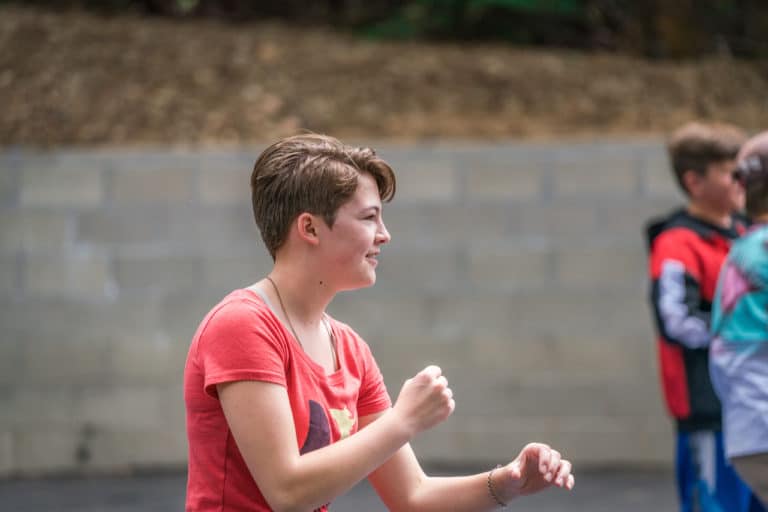 What kinds of stunts does your aspiring action hero live for?

Do they practice swordfights they see in their favorite movies? Or are they an all-around lover of fight scenes? Are they afraid of heights but love watching movie stars take exciting leaps and falls?

Most people don’t know how complex the world of stunt work really is. Sure, you know there are stuntmen on big-budget action movies, but not every stunt involves high-speed car chases, dangling from a building, or Olympic acrobatics.

In fact, most stunt work happens in the basics, from choreographed scenes to tumbling.

Every stunt performer has a niche. Here are a few stunts we’ll teach to help your camper find what they love the most.

How much choreography do you think goes into the average fight scene? Hint: a lot more than most people realize.

Fight scenes, falls, and any other action scenes are actually just as well-choreographed as a ballet. Remember, actors have to do this for several takes, and despite how it looks on screen, they’re not actually hurting each other. If an actor “punches” someone on screen, their fist never actually connects–but in order to be convincing, it has to look that way.

The best action scenes have an order of events. That’s not accidental. When someone is knocked down or responds to a blow, they have to perform in a way that makes sense for the fight scene while also moving the action in the right direction.

This is why our instructors spend a lot of time emphasizing choreography. They’ll teach campers to use their creative thinking skills and plan a scene from start to finish, ensuring that scenes are convincing, exciting, and still safe.

Most people don’t actually know how to fall safely. In fact, there are only a limited number of sports and activities that teach this skill. The difference with stunts is that you’re trying to make a fake fall look realistic without causing damage.

Take shoulder rolls, for example. These are a common feature in Hollywood action movies, allowing fighters to quickly get up from the ground. Most people don’t know how to tumble, but every stunt performer does.

At our camp, we have professional-grade tumbling mats and a trampoline where campers will learn how to get back up when they fall–literally. It’s all about building resilience, and it’s a skill that will serve them well even when they’re not performing stunts. 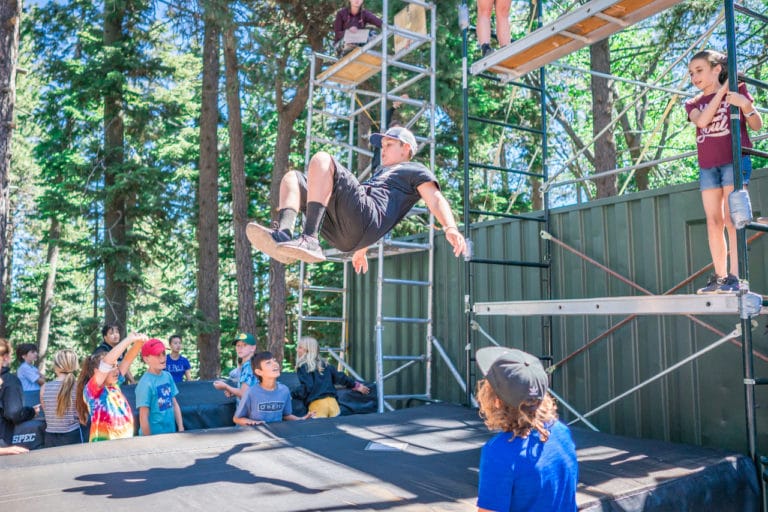 Most of the time, when you see an intense fight scene (or almost any fight scene) onscreen, what you’re actually seeing is a green screen and a stunt double. This is for safety and liability reasons–fights are highly choreographed, and teaching an actor how to fight with the same skill as a stunt double is a long, expensive, and risky process.

And yes, they’ll get to handle a sword–a LARP sword, that is, which has weight added to it to get a real feel for the fight but is no sharper than a rubber knife.

What Your Camper Learns from Stunts

When your camper comes to stunt summer camp, they’re not just learning how to stage fights, fall from heights, or roll like a pro.

What they’re really learning is how to face their fears, think creatively, and work in teams to put on a unique performance. They’ll learn how to stand up when they fall, how to have patience with complex tasks, and how to be resilient even when they fail.

At the end of the day, what we’re really teaching our campers isn’t sword fighting or falling, but how to learn from failure, even if it’s scary. Even if they never do stunts in theater or movies, they can still fall back on that skill for the rest of their lives.

Ready to Send Off Your Budding Daredevil?

Ready to give your child a summer experience they’ll learn from for years to come? If so, it’s time to enroll in stunt summer camp.

We’re committed to giving our campers an experience they’ll love while teaching them invaluable skills, because we know that summer camp should be more than just a way to while away the summer. Click here to take a look at our upcoming camp dates.