Learn How to Read Your Audience at Comedy Summer Camp

That’s the nightmarish sound of an audience not laughing. It is every comedian’s worst nightmare. Well, it may come in second to falling off the stage and getting hurt. But the reality is, silence is death to a comedy career.

How do young comedians cope with managing an audience? There’s no magical button to push that will ensure every person you’re performing for will get each joke.

At Pali Adventures Comedy Summer Camp, budding comedians will learn all the basics about putting together a set of jokes and a routine that should wow the audience.

Most importantly, they’ll learn about reading an audience to make sure they’re enjoying the act.

Here are a few tips to get you started.

The Work Begins Before You Step On the Stage

In order to connect with an audience, you have to know who they are. Doing a little homework before your gig can mean a world of difference once you hit the stage.

Audiences laugh about things they can relate to. Your set needs to be flexible enough to drop a few jokes and substitute in others that fit the location better. Telling people in a land-locked city jokes about the ocean probably won’t have the same impact if you told the same joke in San Diego or Miami. It doesn’t mean the jokes aren’t good, just not good for those people. 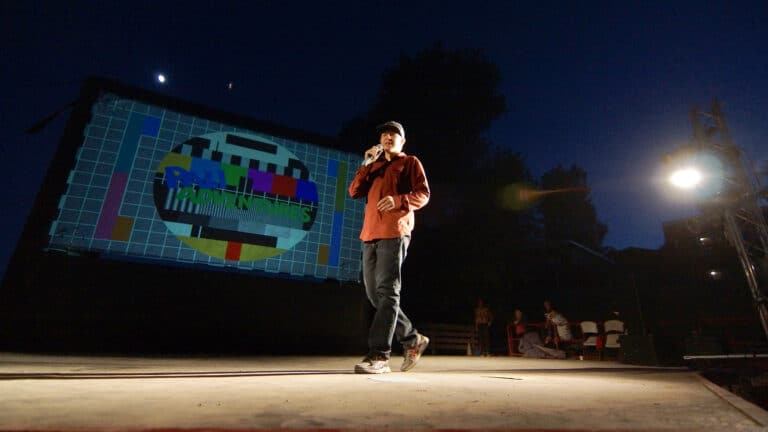 Taking the research a step further, try to find a way to observe your audience right before you go on stage. Find a spot in the back of the crowd and watch for ten minutes or so. How do they interact with each other? What is their reaction to the other comedians? Is there a rowdy table that steals all the attention? Or, worst of all, does the audience have no reaction at all to anything going on during the show? It might be tough to watch other comedians deal with that last one, but you can learn from their mistakes and try to salvage the night’s fun for everyone.

Good comedy should feel like a friendly dialog between the person on stage and the people watching them.

This isn’t a speech class. No one is there to listen to you read off a list of jokes that sound like a Powerpoint presentation. You need to find a natural rhythm between what you’re saying and how the audience reacts.

The easiest way to do that is to approach the audience like you’re in a room with a bunch of friends telling stories about the craziest thing you did during summer vacation. Everyone loves a good story. Sometimes it’s because they relate to something you’re talking about. Most of the time they’re just waiting to hear what happens next. The longer you can put off the punchline of your story, while still keeping it interesting, the better the audience will react.

“I was alone in the house the other night. Thankfully I was alone because I was in sock monkey pajamas, fuzzy slippers, and didn’t care what my hair looked like. In the middle of my ahem-tenth-ahem episode of Friends, a THUD came from the kitchen. I thought, ‘This is it. A robber’s in my house and I’m wearing sock monkeys.’ Turns out a cat dive-bombing into a box sounds a lot like a man breaking down a door.”

Getting the Audience Involved

There are a few tried and true methods to make your routine more interactive.

Single someone out – This is where watching your audience beforehand comes in handy. Find someone you think is interesting and ask them a question or make an observation about them. Use their reaction to improvise a quick joke. Don’t linger too long, though. You’re the one they came to see, not Bob who happened to sit in the front row. 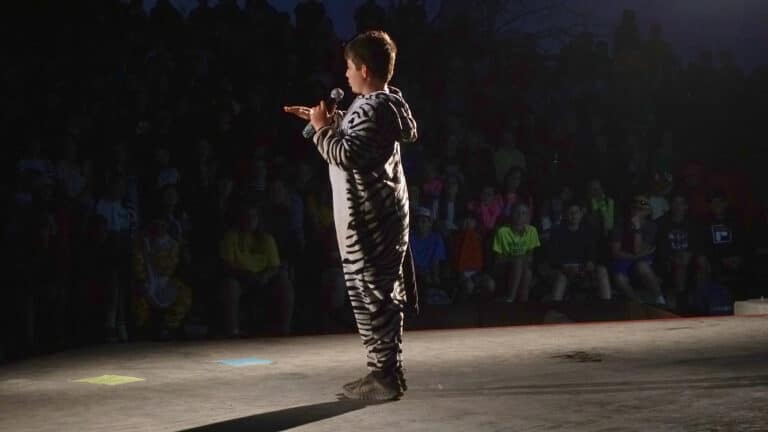 Call out the rowdy table – There is a bit of a risk with this one. The rowdy table already has everyone’s attention. But sometimes by putting the focus on them, they’ll get embarrassed and quiet down. A passing observation about their behavior will at least make the rest of the audience who has dealt with them all night chuckle. And that’s the point. It’s not fair for one group to have all the fun at the expense of others. Turning it around on them will make everyone else relax.

Walk through the audience – Take your story down to the people. Pause as you pass a few tables to ask them questions that will help further the story. This breaks up the pacing and prolongs the sense of anticipation. For the joke above that might include questions like, “Do sock monkey pajamas make me sound old? Are kids still playing with them nowadays?”

Know When to Retreat

Sometimes the audience just isn’t connecting with anything you’re saying. Instead of powering through your set and watching the boredom ooze across the audience, take a step back from the routine.

Address the crowd like the intelligent people they are. “This isn’t working for you, is it?” If they say no, then try a new approach. There is no point dragging out a set no one enjoys. The audience will appreciate your honesty and might be more willing to try and connect with your next set of jokes.

There’s Much More to Learn at Comedy Summer Camp

Comedy is a rough business to get into. Being able to take the time now to learn the ropes gives young comedians a head start on what could be a promising career.

Pali Adventures is all about helping campers flex their creativity. We also want them to have fun. Comedy Summer Camp is a perfect way for them to do both. Not only will campers spend every morning polishing their comedy routines, but in the afternoon they can let loose and have fun by selecting from over seventy different elective activities.

Think you have what it takes to become a comedian? Contact us today to learn more about Comedy Camp.