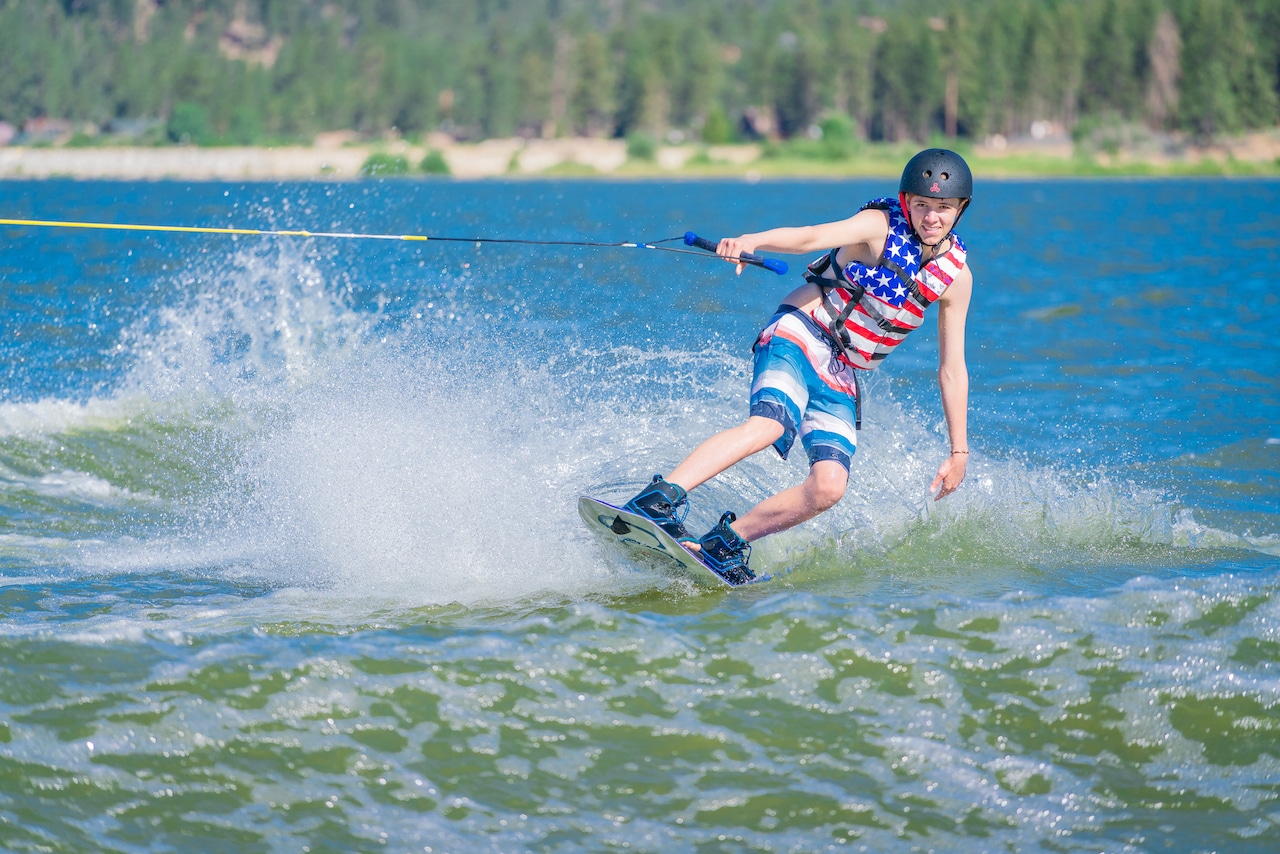 There are a few sports that involve going fast, feeling like you’re flying, and being on the water all at once. One of those is boat racing or driving a boat, but there are regulations about how old you have to be and where you can do that.

The sports that meet those criteria and don’t have age or legal restrictions are wakeboarding and water skiing. Yes – there is a difference between the two, though the idea is similar. You can think of it like skiing vs snowboarding, except on the water, not on the snow.

Are you wondering which one is a better fit for you? Water ski camp or Wakeboard camp? Which you should start with? We’re answering all those questions and more, below.

The History of Wakeboarding

Wakeboarding is the newer of the two sports, born by some creative surfers. Legend has it that surfers saw water skiing and thought, I can do that on my board! Allegedly they tried it out, standing on their surfboard and holding onto the ski rope, and the sport was born.

Whether or not that tale is 100% true, we don’t know. What we do know is that the sport officially started when a man named Tony Finn came up with a “skurfer”, which was the first version of a wakeboard, in 1985.

His Skurfer was a mix between water skis (minus the foot straps) and a surfboard. It was wider than skis but shorter than a surfboard. When it comes down to it, it was pretty much the perfect combination of the two.

Tony believed in the sport and wanted it to be the next x-games type event, where people could do flips and jumps they were unable to do with a regular surfboard. His dream came true in 1990 when ESPN held it’s first skurfer championships.

A few years later the sport went viral when H.O. Sports introduced a new skurfer type board, calling it a wakeboard. They’re responsible for making the sport what we know it as today. 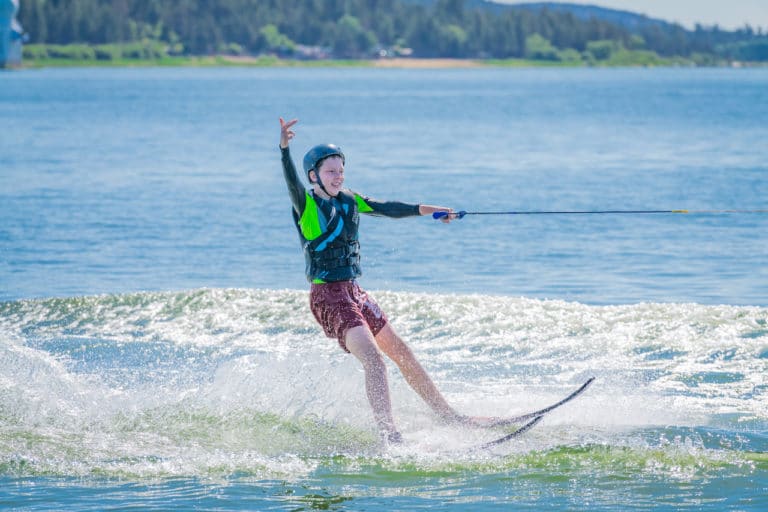 The History of Waterskiing

Water skiing, on the other hand, is a lot older than wakeboarding. How much older? Approximately 60 years!

The sport was created in 1922, while wakeboarding, or skurfing, didn’t come to be until 1985. And while the two sports were created years apart, their foundings were similar. Like skurfing, water skiing came to be through the ingenuity of a man who had some supplies and an idea.

In this case, his name was Ralph Samuelson, and instead of cutting apart a surfboard, he took ahold of two wooden boards as the first set of “skis.” He must have thought something like, “It works on the snow, why shouldn’t it work on water?”

Brave Ralph took to the water with his skis in the last days of June 1922, using a clothesline as a pull rope. It took him a few days to perfect the technique but when he did, his brother and their friends immediately got on board or on boards, rather.

Ralph himself didn’t create the sport thinking about all the thousands he could make. In fact, he wasn’t the person to patent it or make the first retail water skis. And though we wish the inventor had gotten the financial credit he deserved, he’s still honored as the father of waterskiing, today.

Which is Easier Water Skiing or Wakeboarding?

There’s not a clear answer to this. Whichever is easier for you is based on the muscles you have that are already strong in your body and which sport you learn first. It’s just like skiing vs. snowboarding – the one you learn when you’re younger is the one that’ll be the easier one for the rest of your life.

That means you should try both! Water ski camp and wakeboarding combined – but read the information below to figure out which might be more appealing.

Both sports require leg and chest strength,  but since you have to balance both your legs on the wakeboard (vs one ski on each leg), wakeboarding takes more core strength.

It also feels similar to skateboarding and surfing, so anyone who is familiar with one-board sports may find comfort starting here.

If you’re determined to be the best wakeboarder possible, practice planks, do pushups, and maybe even get yourself a balance board before camp. That way you’ll be prepared when it’s your turn to strap on that life vest and go sailing over the water.

Skiers, both water and snow, need to have strong leg and hip muscles. Your hips act as the liaison between your leg muscles and your core, playing a large part in helping you stand upright.

Like wakeboarding, you’ll need to concentrate on your core strength if you want to stay standing longer than a few seconds. Your core balances you on the water while your legs hold you upright.

Planks, squats, and shoulder rows (with the age-appropriate amount of weight, or bodyweight) are all good ideas to get your body ready for waterskiing at summer camp. 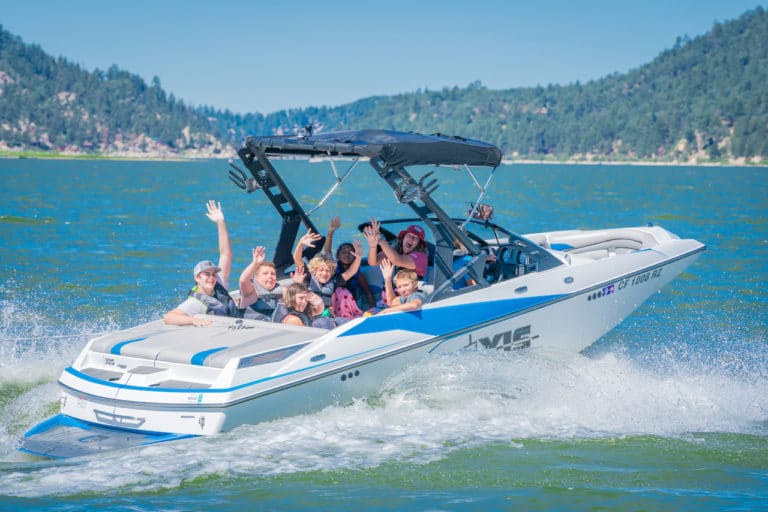 It doesn’t matter how strong you are, both wakeboarding and waterskiing take practice. Everyone falls most of the time their first day and into their second. Don’t let falling discourage you from getting up and trying again – it’s part of how you learn!

Remember that it took the inventor of waterskiing days to figure it out himself and if he was alive, he’d expect the same from you, too.

Why choose water ski camp OR wakeboarding camp when you can try both? You’ll be flying across the lake at Water Sports Camp in no time!